What is Hookah and How to Use it? 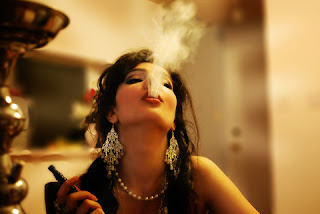 Shisha, hubble-bubble, goza, narghile are all names for hookah. This device for smoking was invented back in the 15th century in India and rapidly became popular in the Middel East. Over the past decade using hookah became a fashionable thing in the USA, especially among young people.

Newest study by Centers for Disease Control & Prevention reveals that hookah use increased almost two times among high school students in 2013 - 2014, from 5.2% to 9.4%, or from nearly 700,000 to 1.3 million students. Young people choose to use hookah because it is modern, cool, trendy, safe and tasty.

It was estimated that totally 100 million people smoke hookah today! Why it is so popular these days? Well, people say it is safer that cigarettes.

The hookah looks itself very exotic and this attracts people to try it. Modern hookahs look differently. Expensive devices are decorated with precious gems while cheap devices are simple.

At the top of device is found a bowl for making smoking mixtures from tobacco, molasses, honey, fruit pulp and different flavorings (peach, mint, cola, etc). Smokers are free to make different mixtures and experiment with flavours. Generally, experts say that in the mixture 5-10% are crushed tobacco leaves.

How to use hookah?

After placing in bowl all ingredients, smokers put a perforated aluminum foil above it, then put a cube of burning charcoal on top. Smoke is produced from tobacco through the foil. The smoke goes via body of the water pipe and gathers above the water in a bulb at the bottom of hookah. 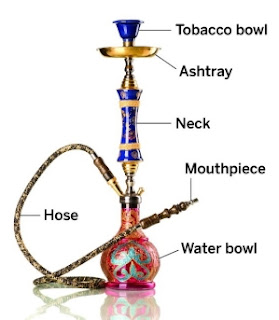 To inhale the smoke it is necessary to use mouthpiece attached to bulb. Thus smoke goes through the water and then riches smoker's lungs. Some say that water bulb acts like a filter and does not allow toxic substanes go into the lungs. Water dissolves nicotine, but not all niconine found in tobacco is being dissolved and only part of it, therefore a session of smoking hookah equals using two-three cigarettes.

These days  water-pipe tobacco is not regulated by FDA and there are rumours that the situation may be changed in the nearest future. Most probably, the regulation would touch the legal age to use hookah.

Email ThisBlogThis!Share to TwitterShare to FacebookShare to Pinterest
Labels: hookah